The JCRC educates, advocates, and acts on issues at the local, state, and national levels to advance Jewish concerns in the public arena.

JCRC defines advocacy priorities based on our official positions. Check out the latest Advocacy Alerts to see what JCRC is currently working on.

Official Positions of the JCRC Council
Contact Your Elected Officials

For Missouri trans youth and their parents, the legislature's focus brings anxiety

“This bill seeks to codify into law discrimination against trans youth,” Picker Neiss said on Wednesday’s St. Louis on the Air. “It's being pitched as if this is something that we should be scared of, that our children are scary. And that in and of itself is hugely problematic at a time when we're already seeing the trans community being attacked and marginalized and facing violence simply for who they are.”

"Reducing barriers to employment, is one of several tools to help reduce the recidivism rate in Missouri," ... "Finding paid employment can be nearly impossible due to the stigma of incarceration and the occupational licensure boards which are allowed to reject applicants with criminal histories, even when that history has no relevance to the job in question. This clarification will enable more returning citizens access to employment and reduce recidivism."

For the second year, Proudie and Rep. Shamed Dogan, R-Ballwin, have introduced legislation that would create the CROWN Act, which stands for Creating a Respectful and Open World for Natural Hair. It would prohibit discrimination on the basis of hair texture and protective hairstyles in educational institutions that benefit from state financial assistance or state student financial aid. The measure passed unanimously out of the Special House Committee on Urban Issues on Jan. 31, on the eve of Black History Month. It has since been approved by the House Rules Committee, making it eligible to be placed on the chamber’s debate calendar...Cheryl Adelstein, deputy director of the Jewish Community Relations Council of St. Louis, said systemic racism in society overall has created a wealth and income gap, which can be closed in part through education. “We want to make sure everyone is comfortable getting their education,” said Adelstein, during the Jan. 24 hearing. “And these bills will reduce discrimination in publicly-supported education institutions.”

The JCRC is the umbrella organization for 32 St. Louis Jewish community agencies and organizations.  All policy decisions are a reflection of the mission and the goals of the JCRC.  We work to achieve a consensus on issues of central concern to the Jewish community wherever possible, in both the domestic and the international arenas, and to articulate those positions in an appropriate manner.  In doing so, we recognize and draw upon the strength and expertise of our constituent agencies to represent and express Jewish interests and values in the community.  In addition, the JCRC works with organizations and institutions in the general community to promote and enhance the values of American pluralism and democratic freedoms.

At-Large Representatives have been selected on the basis of their involvement in the community.  They are asked to bring this experience to bear in Council discussions and votes.

New policy positions can be initiated by: the JCRC Board, a JCRC Committee/Task Force, a Constituent Agency, an individual member, the JCPA (Jewish Council on Public Affairs) or non-JCRC Jewish community organization.  The issue is brought to the JCRC Board prior to coming before the Council for consideration or reconsideration. 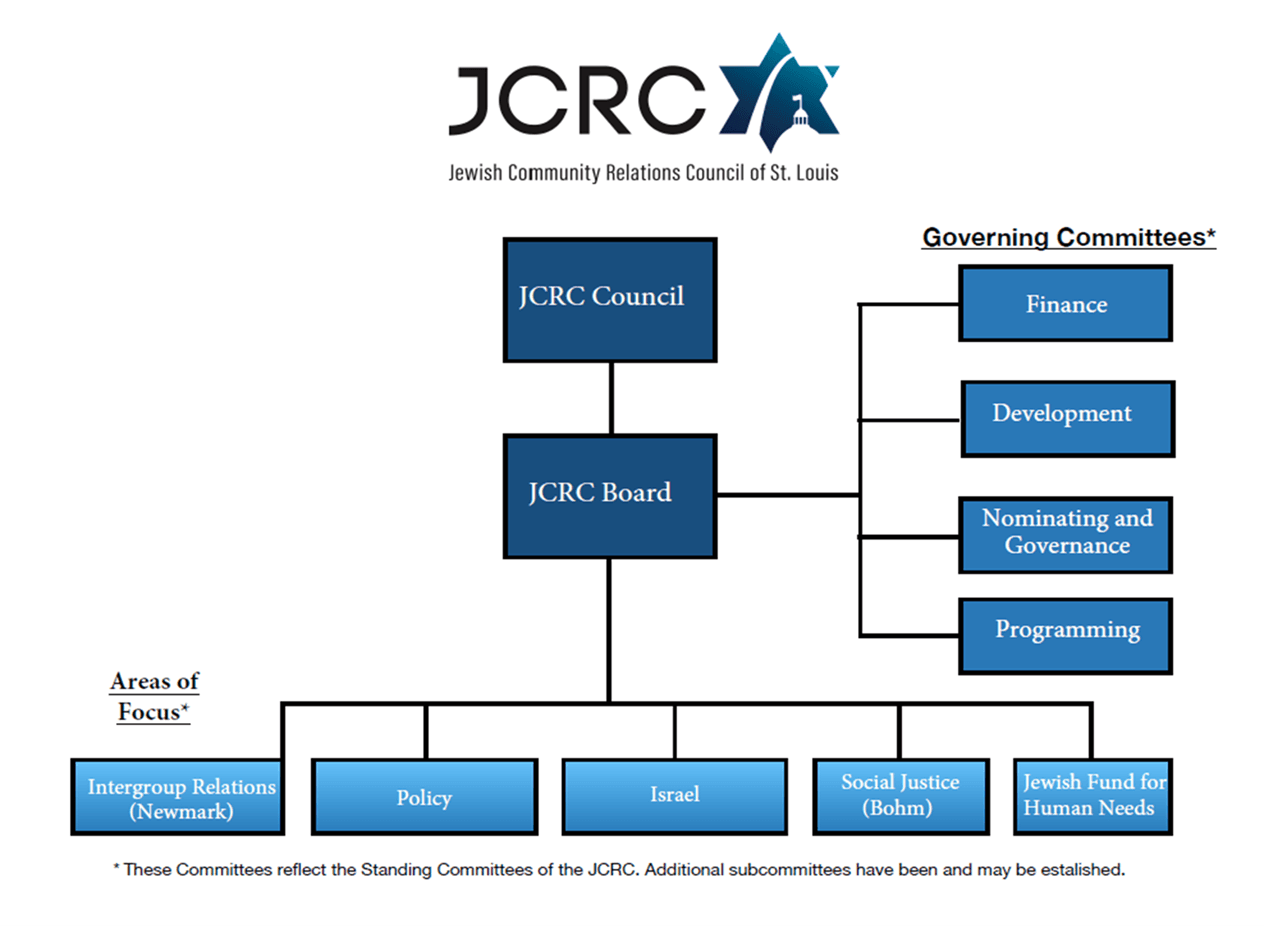